Weekend of Prayer and Fasting for Trafficking Victims 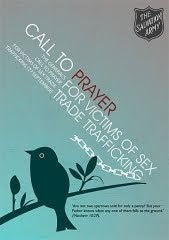 September 25-27th concerned individuals across the world will join in prayer and fasting for the victims of sex trafficking and modern day slavery. In an effort to raise funds and awareness for this project, the Salvation Army is raising hands and hearts together in a special weekend dedicated to praying and fasting for the social injustices forced upon many individuals in our world today. For more information about this important project and other organizations partnering with The Salvation Army, go to the Salvation Army homepage.

For years, author Kay Marshall Strom has visited countries where human trafficking and modern day slavery run rampant. Her recent fiction release, The Call of Zulina, draws attention to the historical issues of slavery, that unfortunately continue today across the world and even in the United States of America. Through her diligence and commitment to help resolve inhumane issues revolving around slavery and trafficking Strom has become an expert in the field.

Enormous eyes in a bony-thin face, and a baggy green dress that dragged the ground. Because of all the cast-off children at the village school in India, the raggedy girl stood closest to our translator, he gently asked her, "What is your name?"

"Your name. What is it?" the translator asked again.

The girl whispered her answer: "I have no name."

A child with no name. A little girl abandoned so young she could not even remember what her parents had called her. She grew up begging at the train platform, snatching up the scraps harried passengers dropped, watching other children picked off by traffickers. Now that she was seven or eight--perhaps even a scrawny nine--the traffickers had come for her. But the girl screamed and kicked and clawed so ferociously that someone called the police. Someone with clout, evidently, because the police came and pulled her away from the traffickers. Somebody in the crowd suggested that instead of putting the child in jail, the police might take her to the village school, which they did. They dropped her at the door and left.

Human trafficking, especially sex trafficking, is rampant around the world. We think of it as an eastern European problem, or Indian or Nepalese or Thai. It is. But it's also a Western problem. The U.S. State Department estimates between 14,500 and 17,500 people are trafficked into the Untied States each year, but concede that the real number is far higher. According to the U.S. Justice Department's head of the new human trafficking unit, there is now at least one case of trafficking in every state.

The little girl with no name was fortunate that someone responded to her screaming pleas. What would you do if you heard a child shriek for help? Of course, if she were a trafficking victim in this country, she wouldn't likely scream or kick. She would probably shrink away in terror, or act submissively. You might see wounds--cuts, bruises, burns. Perhaps what would catch your attention would be the constant work: babysitting, cooking, washing dishes, scrubbing floors--never just being a child. Or maybe you couldn't say exactly what was wrong--only that something about the child's situation made you profoundly uneasy.

Please, please, if you suspect a person is being trafficked, call 911 and report it. Yes, it is okay. Yes, even it you are mistaken. In fact, eighteen states require citizens to report possible child abuse or neglect of any kind.

Oh yes... Before I left the school in India, I asked if we might give the little girl a name. She is now Grace. 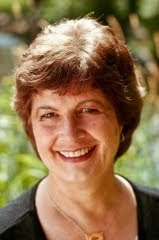 Author Kay Marshall Strom has two great loves: writing and helping others achieve their own writing potential. Kay has written thirty-six published books including Daughters of Hope: Stories of Witness and Courage in the Face of Persecution and In the Presence of the Poor. She's also authored numerous magazine articles, and two screenplays. While mostly a nonfiction writer, the first book of her historical novel trilogy Grace in Africa has met with acclaim. Kay speaks at seminars, retreats, writers' conferences, and special events throughout the country and around the world. She is in wide demand as an instructor and keynote speaker at major writing conferences. She also enjoys speaking aboard cruise ships in exchange for exotic cruise destinations.

Schedule Kay for an interview or request her book for review by contacting Kathy Carlton Willis Communications at WillisWay@aol.com or call 956-642-6319.

Email ThisBlogThis!Share to TwitterShare to FacebookShare to Pinterest
Tags: Link Along