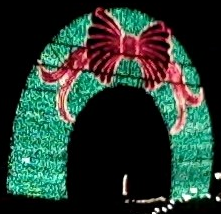 Every year we try to go the big Christmas lights park in Lindale called Santaland. It has the lane of trees, the awesome tunnel of lights, Texas-themed vignettes, and an entire section devoted to the life of Christ. We never got around to going last year, so I was determined to go this year. Since my darling hubby gave me a new computer for Christmas (SQUEEEE!) that actually works with my Flipcam, I broke it out and took some videos to share.

*The links are to the videos as posted on my YouTube channel so this page will load faster for you.*

The trees in the lane now dance to music that's broadcast from a dedicated radio station like all those popular videos you see of lights dancing on houses. I didn't think about video until after we had gone through it, so I caught it on the way out:

Then you go through the tunnel of lights, which I forgot to video. 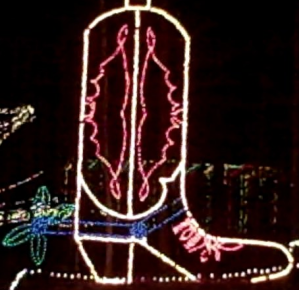 There was a section of Precious Moments angels doing all kinds of things, but the video was washed out. :( They're really cute, and I'm sad you don't get to see them.

The Life of Christ was covered, which I love. It's nice when someone includes the whole story and not just the Nativity.

We had some cookies (bought in a bucket with the Nativity story on it) and Bethy had mini marshmallows while we went through the park. It's not a big deal and only cost $20, but it's another great family time to store away in our hearts.

Email ThisBlogThis!Share to TwitterShare to FacebookShare to Pinterest
Tags: Yada-yada