Update:
23 January 2009
I got an e-mail this evening from Jennifer Gunderson, the publicist for MomLogic to let me know that they have clarified the post. Huzzah for sites that listen to feedback and pay attention to what the world is saying. Good show, MomLogic, good show!

Published 22 January 2009
I saw MomLogic tweet a link on Tuesday, and since it said free stuff, I naturally went to check it out. This is what I found:
[caption id="attachment_1002" align="aligncenter" width="525" caption="MomLogic makes vague promises - just like someone else...
Click the screenshot to go to the post"] 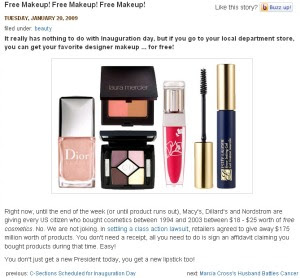 Right now, until the end of the week (or until product runs out), Macy's, Dillard's and Nordstrom are giving every US citizen who bought cosmetics between 1994 and 2003 between $18 - $25 worth of free cosmetics. No. We are not joking.

I went and checked out the class action paperwork to get the skinny since the post was so short and felt the absolute need to leave a comment.

According to the legal document, only US citizens who bought cosmetics *from those stores* are entitled to a free product. Your post wording makes it sound as though anyone who bought cosmetics period are entitled to free product. Also, the cosmetics counters have not become free-for-alls. Only specific items are designated as free, and those that are marked as such are listed in the documentation. Bad show for not being more up front with details, MomLogic. This post is vague and misleading, and thereby a disservice to your readers.

What do you think? Was MomLogic too vague in this post?

Email ThisBlogThis!Share to TwitterShare to FacebookShare to Pinterest
Tags: Yada-yada